To purchase any of these publications by mail order (UK only), please complete the Publications Order Form and send it to: ODAS, 28 Church Avenue, Sidcup DA14 6BU, enclosing a cheque payable to Orpington and District Archaeological Society. 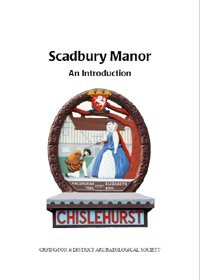 A booklet containing a wealth of information about the history and archaeology of this interesting ruined moated manor, the former home of the Walsingham family.

Excavations at Scadbury by Alan Hart. A series of reports on the long-term ODAS excavations of the moated site and its environs. All in full colour with illustrations and photographs. 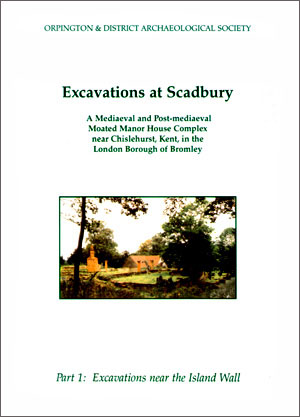 Part 1: Excavations near the Island Wall.
A trench alongside the massive island retaining wall revealed evidence on its dating and method of construction.
Contains finds reports.
28pp., 12 figures, 2 photographs, one in colour. A4 perfect. ISBN 0-9539385-0-6, published 2000. Price £3.00 plus postage. 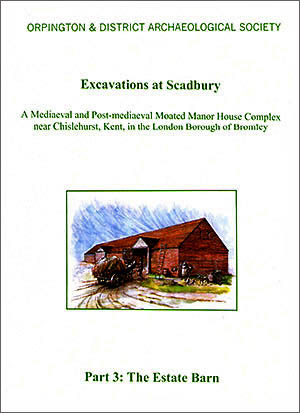 Part 3: The Estate Barn. Outside the north-western corner of the moat, excavation revealed the foundations of a large 16th century barn and enabled a virtual reconstruction. With finds reports.
20pp., 9 figures, 12 photographs, some in colour. A4 perfect. ISBN 0-9539385-7-3, published 2003. Price £2.50 plus postage. 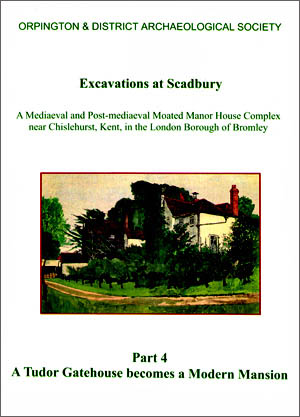 Part 4: A Tudor Gatehouse becomes a Modern Mansion. Excavation of the site, west of the moat, of the mansion of the Marsham-Townshend family, which was burnt in 1976 and demolished, showed that the building had a substantial Tudor origin. With finds reports.
24pp., 6 figures, 18 photographs, some in colour. A4 perfect. ISBN 0-9539385-9-X, published 2008. Price £2.50 plus postage.
Part 4 mentions the Early English Sundial which is featured by the BBC history website (see links page). 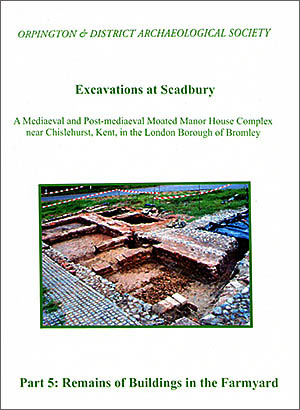 Part 5: Remains of Buildings in the Farmyard. Excavation 100m west of the moat revealed foundations of buildings including Tudor privies and late Victorian pig sties. With finds reports.
20pp., 7 figures, 10 photographs, some in colour. A4 perfect. ISBN 0-9539385-8-1, published 2005. Price £2.50 plus postage.

Scadbury and the Walsinghams Dr Joan Thirsk
An article based on a talk given at a 1983 conference ‘Scadbury under the Walsinghams – a moated site and its history’ Reproduced from Archives, illustrated by Christina Clark
11 pp. Stapled A4, card covers. Price: £2.50 plus postage.

A History of the Reconstructed Medieval Building Formerly at Scadbury 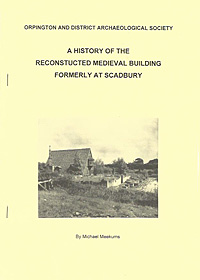 An account of medieval timbers originally from St Mary Cray and erected at Scadbury in the 1930s, now removed to the Weald and Downland Museum

Aerial photo jigsaw of Scadbury Moated Manor and Scadbury Park, as well as the jigsaw you also get a paper copy of the aerial photo.