This leaflet was produced by ODAS to support the Scadbury Apple Day – an open day held in 2018 to celebrate the orchards at Scadbury and their history.

The PDF of the leaflet can be downloaded using this link.

The text of the leaflet is reproduced below.

History of The Orchards at Scadbury

Visitors to Scadbury Park nature reserve in spring may have noticed the beautiful apple, pear, cherry and plum blossom as they walked along the paths by the side of the fields. However, many are probably not aware that a number of these trees have survived from the commercial orchards that were first planted in the 1920’s by Hugh Marsham- Townshend, who then owned the estate.

In 2017 DNA testing of some of the trees by The Orchard Project revealed that they are a mixture of varieties including Worcester Pearmain, Gladstone and Beauty of Bath apples, and a Beurré Bosc pear. 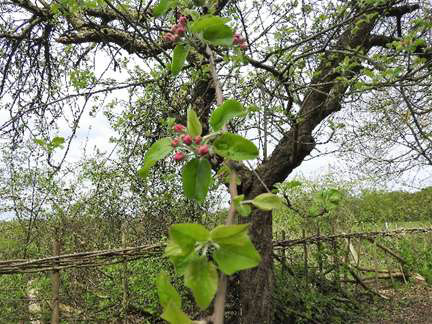 Early History of the Estate
The de Scathebury family settled here in the 13th century and built a?timber framed house surrounded by a moat. In the 16th century the Walsingham family lived here and rebuilt the manor-house in brick. It is likely there was an orchard nearby to provide fruit for the household.

17th Century
The first information about orchards at Scadbury is in an estate valuation from the later 17th century. This refers to ‘large gardens and orchards enclosed with brick walls and planted with excellent fruit’.

18th Century
The 1705 record of the beating of the bounds of Chislehurst parish tells us that the old orchard was south of the manor site.The 1727 Inventory of Scadbury Manor lists a cider press and a cider trough in the brew-house along with coppers for brewing ale. Households often had a small orchard to grow cider apples for home use and cooked apple desserts were popular.

In 1738 the manor-house on the island was pulled down though the orchards remained in use. The estate was now owned by the Selwyn/Townshend family, who moved to nearby Frognal House.

19th Century
The 19th Century saw Scadbury Park Farm managed by estate bailiffs on behalf of the Townshend family. An 1810 map shows small orchards to the north of the farm, and to the south and east of the moated manor site.

In 1890 Robert Marsham-Townshend inherited the Scadbury estate from John Robert Townshend, Lord Sydney. The woodlands at Scadbury had been the main source of farm revenue as they supplied timber, but profits collapsed as English wood was replaced by coal, metal and imported timber. Much of the remaining estate land was under pasture for livestock and arable, but with poor harvests and increased costs, change was needed.

The estate archives show expenditure on improved drainage at Scadbury Park Farm from 1895 onwards. This was a good basis for growing soft fruit and orchard fruit, but the idea was not progressed until Robert’s elder son, Hugh Marsham-Townshend, inherited the Scadbury estate. 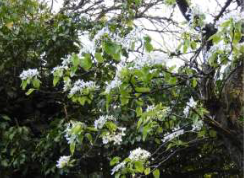 1920s-1971
Hugh Marsham-Townshend was very focused on setting up commercial fruit farming at Scadbury. This had become profitable in the Orpington and Cray areas since the end of the 19th Century. He obtained advice on the soils and fertilizers from the Ministry of Agriculture and bought his fruit stock from Bunyards, a renowned Maidstone nursery.

There was substantial work in preparing the ground, erecting stakes and fences and planting the trees and bushes. The fruit trees were first planted on a number of fields to the north of the estate in the 1920’s.Although he had regular estate workers, Hugh Marsham-Townshend also employed a specialist orchard man – Joseph Biggs – to manage the orchards during the late 1920s and 1930s.

The accounts for the commercial orchards are incomplete, so the revenue earned is unknown. The cost of the initial planting was £1,717.15s.1d. An apple store was built in the 1920’s on the moated island to store the apples after they were picked.

The National Farm Survey for England & Wales, 1941 & 1942 shows that the Scadbury estate still had 52 acres under orchards during World War II.

After the war, the estate passed to John Marsham- Townshend. Although fruit farming was still buoyant in North West Kent, costs were increasing and so was competition from abroad. The commercial orchards were grubbed up in 1971. John Marsham-Townshend died in 1975.

Fruit varieties planted in the 1920s listed in the Estate Accounts

1983 – Present Day
Bromley Council bought the Scadbury Park estate in 1983 to create a local nature reserve. A tenant farmer now keeps horses on what once were fruit fields. It is perhaps a testament to the hardiness of the old commercial apple trees that we still have survivors along the edges of the fields, a hundred years after the first ones were planted.