This leaflet was produced by ODAS to support their work at Scadbury Manor, Chislehurst.

A Brief History of Scadbury Manor

The PDF of the leaflet can be downloaded using this link.

The text of the leaflet is reproduced below.

A BRIEF HISTORY OF SCADBURY MANOR

Early History of the Estate

The first family to settle here were the de Scathebury family, around 1200 AD. Their manor house would have been built mainly of timber and was surrounded by a moat. By 1301, John de Scathebury was the richest man in Chislehurst. The manor estate included fields and woodland, as Scadbury Park still does today. 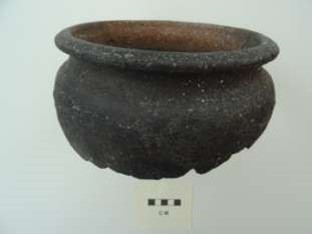 In 1424, Thomas Walsingham – a wealthy London merchant – bought the estate. He had close connections with the royal court. The Walsinghams rebuilt the manor house in brick and constructed a walled kitchen garden. 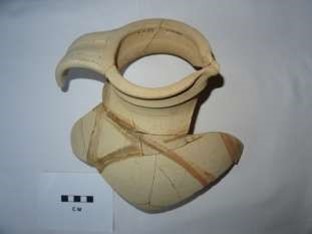 16th and 17th and Centuries

The estate was purchased by John Selwyn and settled upon his son-in-law Thomas Townshend.     In 1738 the manor-house on the island was pulled down. Thomas purchased nearby Frognal House in 1749 and moved there. Thomas’s eldest son, another Thomas, served in the government, becoming Baron Sydney in 1783 and Viscount Sydney in 1789. Sydney harbour in Australia was named after him as he was responsible for the penal settlement there.

John Robert Townshend, Lord Sydney, was succeeded in 1890 by his half-nephew Robert Marsham, who added the name ‘Townshend’ to his own. Robert and his family lived at Frognal.

In 1904 Robert’s son Hugh moved back to Scadbury to a house near the island. He introduced commercial orchards and built an apple store. In the 1930’s he conserved much of the brickwork on the island and in 1936 constructed a ‘medieval manor hall’ on the original foundations of the hall, using timbers taken from an old manor house in St Mary Cray. The Home Guard built WWII defences on the estate. Hugh’s bachelor son John inherited the estate, he died in 1975 and the estate passed to his nieces.

In 1982 the Orpington and District Archaeological Society began a research project into the history of the estate, looking at documentary evidence.  Excavation began in 1986 under licence from Bromley Council.

We excavated on the island and found pottery from the 13th century, including the shelly pot shown overleaf. Behind the brick moat wall on the island we found its construction trench dating from the 15th century. 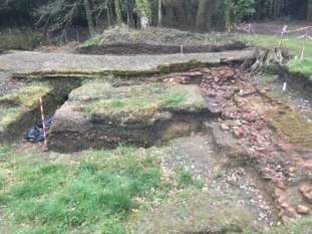 Off the island, excavation shows that the west moat arm was much wider when it was originally dug than it is now. Part of the moat was narrowed in around 1550, perhaps to create a new entrance to the island.

We have also excavated the foundations of the Tudor barn, as well as another early building and uncovered an ornamental driveway which connected the archway to the moat.

What can be seen from the nature trail?

The island is surrounded by water. If you are standing on the path facing the island you can see the remains of the brick foundations of the Walsingham manor house which were conserved in the 1930’s. On the right is the 1920’s apple store. In the centre are four pillars, concrete staircase and chimney which were part of the reconstructed ‘medieval hall’ erected in 1936. In the distance are the stables and walled garden which date from the Tudor times. If you walk left along the path, you can see on the far moat arm the remains of a bridge. 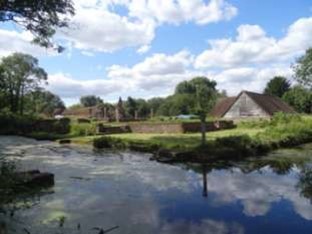 View of the island from nature trail

How can I get involved?

You can join ODAS and help the other volunteers excavate (full training is given), process the finds, weed the site, help open the site to the public and receive a newsletter. See the ODAS website for more information. There is a booklet with a more detailed history of the site and excavation reports which are available to purchase; see  www.odas.org.uk/publications.